Posted at 11:17h in Uncategorised by user_halyard 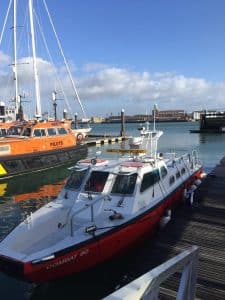 Being one of the fastest men on the planet is an accolade reserved for an elite few .

One of Richard’s recent projects has been to restore a CB90 fast patrol boat. Nothing out of the ordinary but one of the requirements was to significantly reduce the noise emitted from the existing exhaust system.

We had previously supplied Halyard silencers to the shipyard who built the vessels in the 1990s. With some investigation the drawings were identified and with a modern twist and desire to update to a Halyard dual chamber silencer, to further reduce the noise levels, we set to designing and manufacturing the new system.

Fast forward to the completed vessel project in 2020 and the feedback from Richard, as below, has been very positive:

“Yesterday we were told that we had achieved RCD11 certification for CB90 and that of course included the noise challenge. I am writing to thank you and all the Halyard team for a truly excellent job – not only did the silencer fit without any adjustment – but we were below the noise bar It was a really great achievement and a difficult challenge”

Richard is currently on an adventure navigating the UK by sea putting the vessel through its paces. It can be followed on www.marinetraffic.com under vessel name Combat 90 and MMSI 232003610.

This website uses cookies to improve your experience while you navigate through the website. Out of these, the cookies that are categorized as necessary are stored on your browser as they are essential for the working of basic functionalities of the website. We also use third-party cookies that help us analyze and understand how you use this website. These cookies will be stored in your browser only with your consent. You also have the option to opt-out of these cookies. But opting out of some of these cookies may affect your browsing experience.
Necessary Always Enabled
Necessary cookies are absolutely essential for the website to function properly. This category only includes cookies that ensures basic functionalities and security features of the website. These cookies do not store any personal information.
Non-necessary
Any cookies that may not be particularly necessary for the website to function and is used specifically to collect user personal data via analytics, ads, other embedded contents are termed as non-necessary cookies. It is mandatory to procure user consent prior to running these cookies on your website.
SAVE & ACCEPT